Well there was a slight intermission after my degree finished .. but as a friend said to me yesterday…… once you’re on the bus dont get off..so here I am again on the art bus, we just had a bit of along stop waiting for a new conductor…..now that shows my age..all 39 and three quarter years of it…………and now we are trundling forward into/onto wherever….

So whats been happening…….well afer my degree show (I passed by the way)…..I was straight onto an exhibition with Sarah Waters at Rums Eg….Under the Microscope…..

and then at the Petersfield Museum..People of the Heath….. to do with the long term community project I am involved with which is an artist reponse to the archaelogical dig on Petersfield Heath

and then .. I know too many and thens..but I’m a grown up who cares about the rules…..and then I was back to working on my installation with Charlotte Edsell which opens at West Dean’s Chilli Festival today…….Pepenadores.  Super excited about that…..I sort of went off into a little world of my own.. the brief was a response to Edward James’ surrealist sculpture garden in Mexico using recycled materials..(sub text make something for nothing) and I’m always up for a challenge and it was right up my street..so I imagined I was a waste picker..female of course….

and what would I do if I was just using the things around me to create an art installation…inspired by Stephen Turner’s ‘everthing comes from the  the egg’ on at the Aspex Gallery at the moment….we set to work….Charlotte had load of plastic cups and i has a trampoline insert..yes….. well here it is…….. 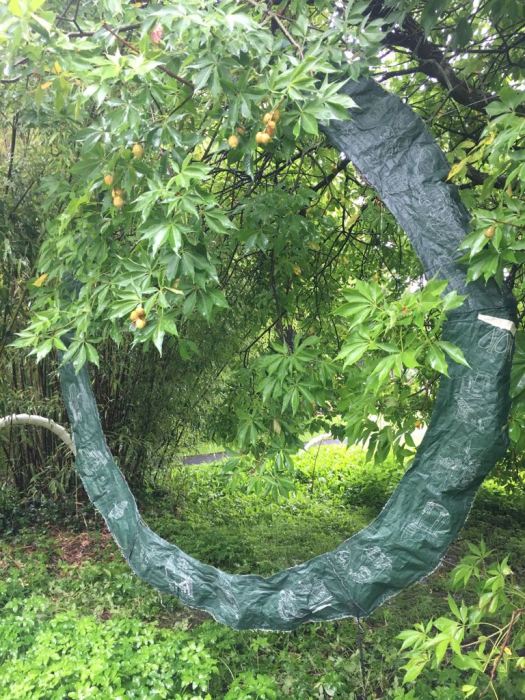 if you’re there use the pathway to go round the back of it..its a good view from there too……

In between times I’ve been inspired by Bedales’ Shakespeare Festival and  ‘As You Like It’ …great to see that one of the girls who used to do Phoenix Juniors was helping out doing the costumes..which were AMAZING!    ..also had a few visits to galleries ..including the superb regency Jane Austen pot by Grayson Perry which is in Winchester Discovery Centre a the moment , went to a talk given by Pat Hunter on the  Henry Moore Tapestries and loved Chris Ofili Weaving Magic….. – great tapestry done by Dovecote Studios in Edinburgh currently at the National Gallery….oh and I’ve visited a few festivals with glastonbury Girl..all the envirionmental art at glasto was great…..and am now off to ITALIA for more inspiration….

Blink and you missed it but I also  did open Studios at Christine Watkin’s Art House for the Romsey Festival at the beginning of July and will be at showing a few things at  Christine’s  Open Studios  later on this month…..currently waiting to see if my funding comes through to start my Masters Degree in September..I’ll keep you posted..oh and Ive been invited to do some handstitiching for the Embroiderers Guild at the Great British Sewing Bee at London Excel in September and will be with the Embroiderer’s Guild at the Knit and Stitch  in October

So I thought I was being a slacker over the summer……this blog is definately a good idea for me……not sure about anyone else…….

PS look forward to seeing your solo show at Ally Pally Sarah..how are the Stones?

PPS Must dash off to West Dean to meet my public… (sub text….. loiter in the bushes and her what they say about it)x

One Reply to “Pepenadores – BACK ON THE BUS”